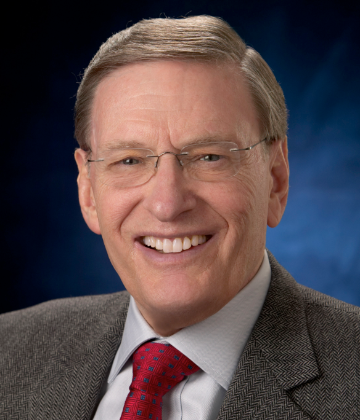 Allan H. (Bud) Selig was elected the ninth Commissioner of Baseball on July 9, 1998, by a unanimous vote of the 30 Major League Baseball club owners.

Selig was born on July 30, 1934, in Milwaukee and received a bachelor's degree in American History and Political Science from the University of Wisconsin - Madison in 1956. After serving two years in the armed forces, Selig returned to Milwaukee and began working in the automobile business with his father.

A life-long baseball fan, Selig, while growing up, followed the old Milwaukee Brewers minor league team and the Chicago Cubs. He became a Braves fan when the National League franchise moved to Milwaukee from Boston in 1953. He subsequently became the team's largest public stockholder before selling his stock in 1965 when the team moved to Atlanta.

Upon learning of the Braves' intended move to Atlanta, Selig founded "Teams, Inc." an organization dedicated to returning Major League baseball to Milwaukee. The group, which later changed its name to "The Brewers," arranged for several Chicago White Sox games to be played in Milwaukee in 1968.

After failing to purchase the White Sox in 1969, Selig's efforts were finally rewarded on April 1, 1970, when a Seattle bankruptcy court awarded the Seattle Pilots franchise to Selig and his investors.

The Brewers appeared in the 1982 World Series, losing to the St. Louis Cardinals in seven games. The club won seven "Organization of the Year" awards during Selig's tenure as club president, including the TOPPS "Organization of the Year" award in 1987, '89, '91, and '92. In addition, the Brewers won an unprecedented three-straight Baseball America awards from 1985-87.

Selig's active role in baseball, in the Milwaukee community and throughout the nation, has resulted in his receiving many awards during his career, including:

Selig is a member of the Board of Directors of the Green Bay Packers, Inc., Marcus Corporation and the Oil-Dri Corporation of America. He is also on the Board of Visitors for the Department of Political Science and the La Follette School of Public Affairs at the University of Wisconsin. Selig is a member of the Greater Milwaukee Committee, the Boys and Girls Clubs Board of Trustees, is a founder of Athletes for Youth and was instrumental in establishing the Child Abuse Prevention (CAP) Fund.

Bud and his wife, Sue, are very active in the Milwaukee community and were co-recipients of the "1990 Humanitarian Award" from the St. Francis Children's Center. They also lend their support and time to the Milwaukee Art Museum. In July of 2001 the Allan H. and Suzanne L. Selig Merit Scholarship Fund was established at the Rothberg International School at the Hebrew University of Jerusalem.

Selig served a dual role as President of the Milwaukee Brewers Baseball Club and Chairman of the Executive Council until his appointment as Commissioner on July 9, 1998. At that time his financial interest in the club was placed in trust and he relinquished involvement in all matters dealing with the operation of the Brewers. In January 2005, the Brewers were sold to Mark Attanasio, thus ending Selig's 35-year relationship with the club.

Bud and his wife, Sue, have three daughters and five granddaughters.